Natural gas consumption was falling over the first months of 2020 in major markets even before the Covid‑19 pandemic, mainly due to historically mild temperatures in the northern hemisphere. In Europe, milder weather pushed down natural gas demand by an estimated 2.6% during Q1 2020 relative to Q1 2019, according to data published by natural gas transmission system operators. Consumption by distribution customers (mainly residential and commercial) dropped by 3%, while gas-fired power generation declined by over 5%, squeezed by a combination of high wind generation and lower heating-related electricity consumption.

Similarly, US natural gas demand decreased by an estimated 4.5% in Q1 2020 compared with Q1 2019, dragged down by a sharp decline of 18% in residential and commercial demand. Mature Asian markets also experienced a contraction in natural gas consumption. LNG imports in Japan fell by 3% in Q1 2020 relative to Q1 2019, while in Korea domestic sales for January and February fell by 2.5%. Natural gas demand in China was essentially flat while in India it grew at almost 8% in January and February compared with a year earlier.

Data covering half of global demand suggest that gas consumption fell by more than 3% in the first quarter of 2020. This finding is based on a sample of key markets in Asia, North America and Europe. Perspectives from other regions are mixed. Demand in the Russian Federation (hereafter, “Russia”) and other Eurasian markets is assumed to have been similarly pushed down by mild temperatures; Russia’s electricity consumption, the main component of gas demand, declined by 1.9% in Q1 2020. But other regions, such as Southeast Asia or the Middle East, have almost no space heating needs and would have therefore experienced more typical consumption profiles.

Natural gas supply did not adjust to this drop in consumption, resulting in a considerable build-up of gas in storage. US dry gas production grew by 7% in Q1 2020 relative to Q1 2019, while global LNG trade increased by an estimated 13%. Europe accounted for about 60% of the increase in LNG imports over this period. While pipeline imports decreased in both markets, underground storage inventories experienced a strong build-up. In the United States they rose by 77% compared with 2019, 17% above the five-year average as of the end of March. In Europe they rose 40%, to reach 80% above the five-year average. These increases were supported by exceptionally low spot prices, with the US Henry Hub price at its lowest Q1 average since 1999, and the European TTF price at its lowest Q1 average since its establishment in 2003.

Lockdowns in China and elsewhere piled additional pressure on natural gas demand. In China, where the Covid‑19 outbreak reached its peak in February, gas consumption growth was close to zero: according to the National Development and Reform Commission, apparent gas consumption grew by 1% in January and February from a year earlier. In Europe, the implementation of nationwide lockdowns in several countries from mid-March sharply reduced natural gas consumption in the industry and power generation sectors. Distribution network consumption was less affected, as residential consumption was stable under confinement and benefited from colder temperatures at the end of March. Natural gas demand fell less in the European countries that imposed restrictions without implementing full lockdowns: between mid-March and mid-April, demand fell by 3% in Germany and 7% in the Netherlands, relative to 2019. 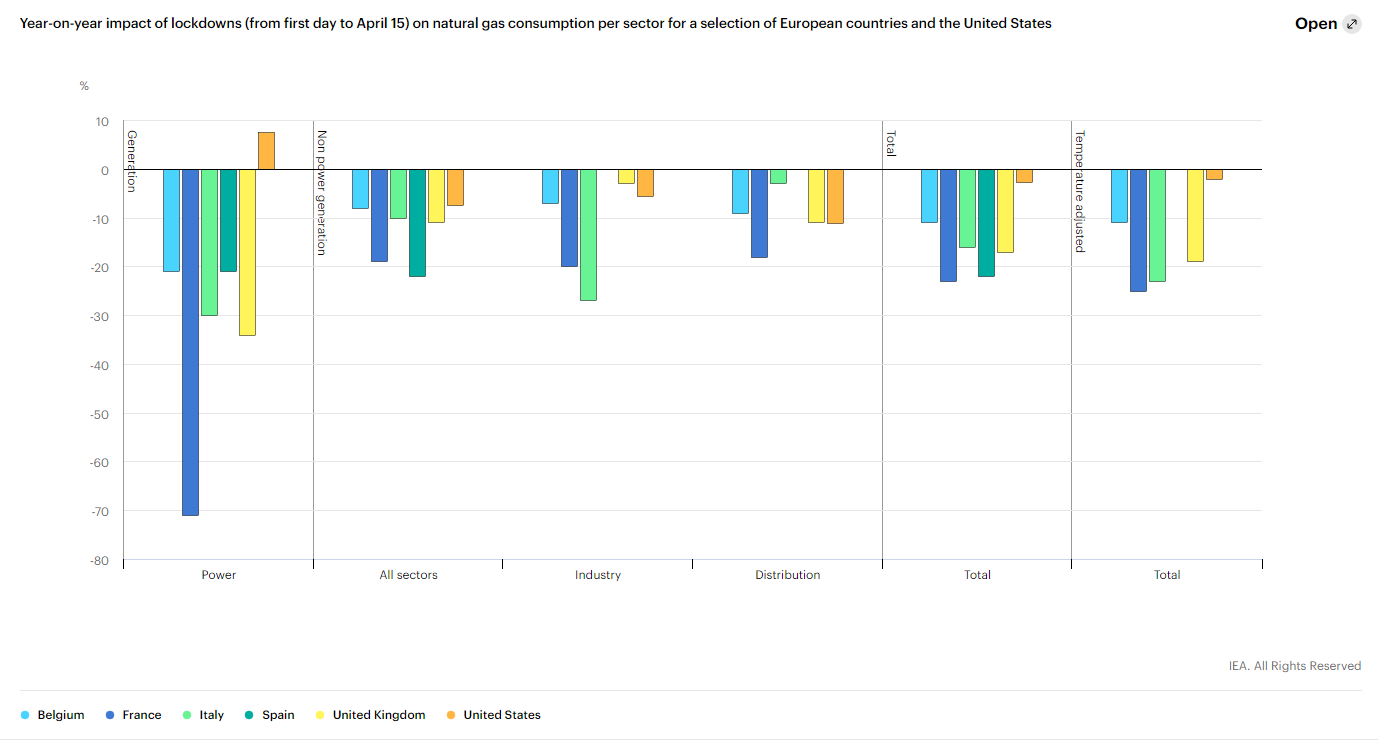 Natural gas consumption appears to have been more resilient in the United States since the implementation of state-wide lockdowns. Demand from the industry sector fell by 6% between mid-March and mid-April, relative to 2019, but gas-fired power generation increased by 8%. In India, the infrastructure operator GAIL reported in mid-April a fall in sales of about 30% since the imposition of a national lockdown, yet anticipated a recovery in the near term as consumption recovers in the fertiliser industry – the largest consumer of natural gas – in preparation for the sowing season.

Global natural gas demand could decrease by 5% in 2020, based on our broad assumptions for the year. This decline is less than the anticipated fall in oil demand, reflecting the fact that natural gas is less exposed to the collapse in demand for transportation fuels. But it nonetheless represents a huge shock to a gas industry that is used to robust growth in consumption. This drop would be the first in annual consumption since 2009, when consumption fell by 2%, and the largest recorded year-on-year drop in consumption since natural gas demand developed at scale during the second half of the 20th century. During the Great Depression in the early 1930s, gas demand in the United States fell by 13% in 1931 and by 7% in 1932. At that time, however, the United States was the only major producer and consumer of natural gas in the world; now gas is a global commodity accounting for well over 20% of global primary demand. Natural gas consumption is expected to fall in every sector and region in 2020 compared with 2019, but most of the declines are in power generation.

Faster post-lockdown recovery in Europe and North America and shorter lockdowns in other regions would reduce the negative impacts on Asian manufacturing economies and gas exporting regions, leading natural gas consumption to decrease by about 2.7% instead of 5%. 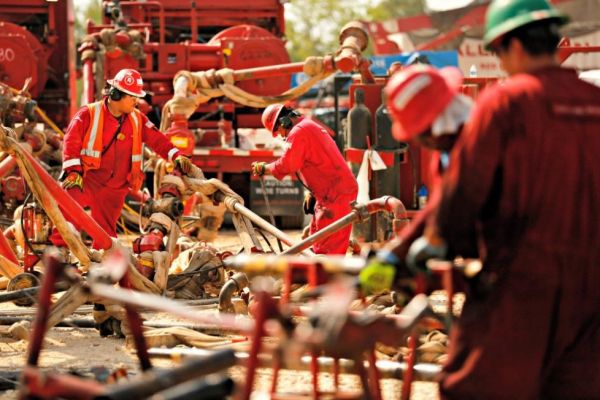 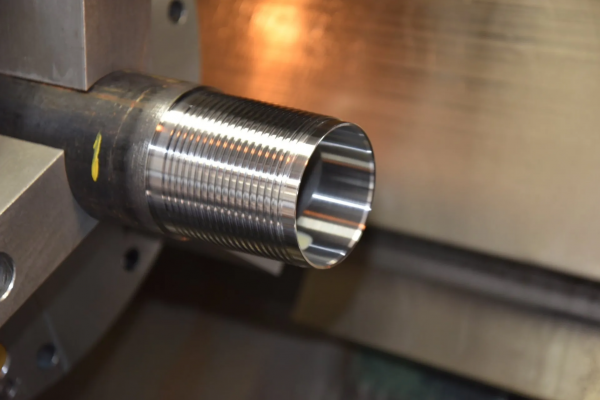 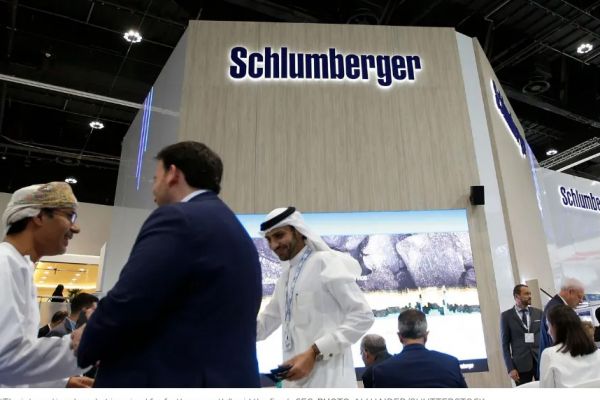